Centuries-old stone doorways, marble floors, vaulted ceilings, historical paintings and modern lifestyle comforts in 42 rooms and suites: All of this is united at four-star-superior “Palais Norica”, located in the center of Bad Hofgastein and operated by the Czerny family. In its almost 600-year history, the former “Hotel Moser – Zum Goldenen Adler” has experienced much, while hosting many a prominent guest. Franz Grillparzer, the famous Austrian playwright, “took the cure” here, for example, in the years 1819 and 1827.


From the outside, Palais Norica impresses with its unostentatious, predominantly white balconies and white window shutters. The guild sign clearly references its long history as an inn, a proud work of art in its own right with eagle’s head, a brewery symbol and grape. We highly recommend taking a close look at the inside as well. Since November 2017, the second oldest house in Bad Hofgastein, only the church is older, presents itself as a painstakingly renovated architectural jewel.

On the lower floors, the net-vaulted ceilings, stone doorways with stonemason symbols and the solid walls date back to the Gothic period. Also preserved are various examples of marble and stone flooring in the hallways, which were added in later centuries. The atrium, which was once exposed to all the whims of the weather, is now protected by a glass roof. The view of the sky and of the interior balconies can be enjoyed from comfortable sofas and armchairs. Here, you can also admire numerous paintings of flowers, closely hung next to one another in traditional “Petersburg style”, and “window paintings” featuring colored rectangles reminiscent of Gothic lead-glass windows. 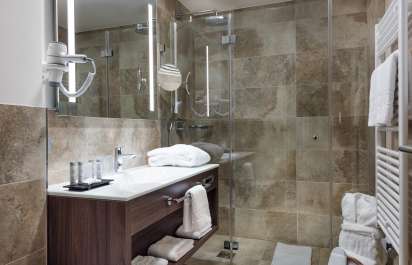 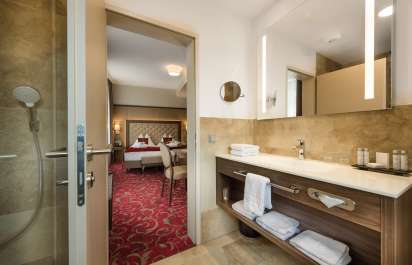 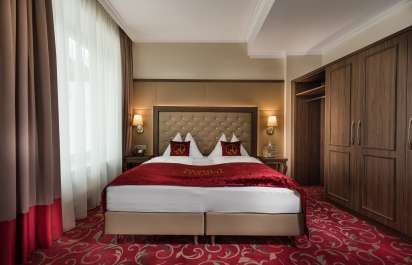 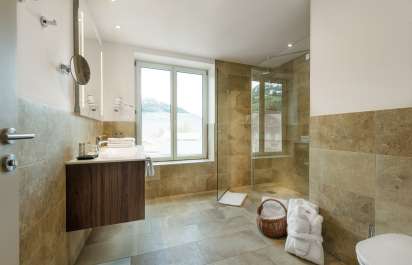 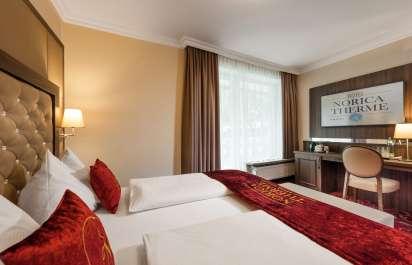 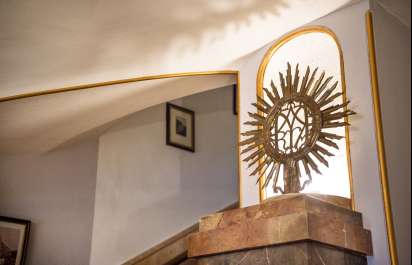 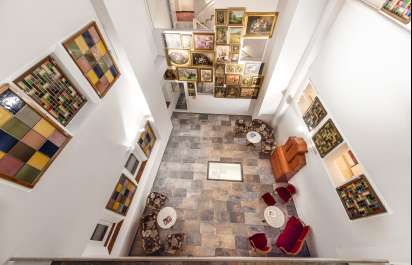 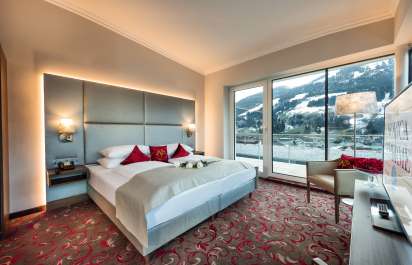 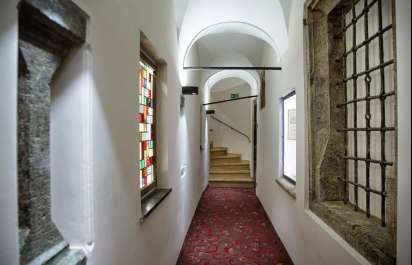 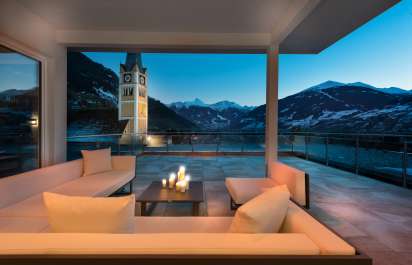 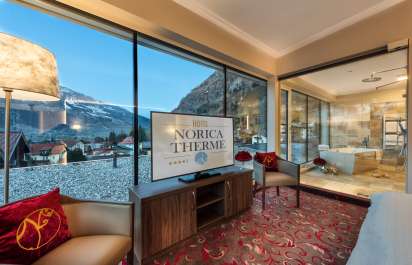 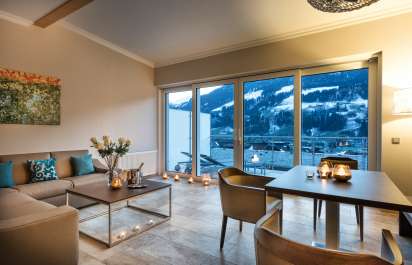 A harmonious contrast to the historical backdrop is provided by modern, spacious rooms and suites, most of which also boast a balcony and views of Bad Hofgastein. A 50 m² terrace on the fifth floor, accessible only to hotel guests, reveals fantastic panoramic views of the town, the church as well as Gastein’s mountain world. During the springtime and autumn, this same terrace is transformed into a meditative space for yoga sessions.

Right next to this, we discover the 75 m² Sky Suite, which accommodates up to four people. Luxuriously appointed and with its own private terrace, it truly is one of the most beautiful places to stay in the entire valley.

A glazed bridge connects the Palais to the main building, Hotel Norica. Guests can take advantage of this bridge to make their way, already dressed in spa robes, to the hotel’s own Celtic Spa and then, via a connecting walkway, to Alpentherme Gastein. Without getting their shoes wet, guests can also cross this bridge to get to the hotel bar, the fireside lounge and the restaurant, where tempting breakfasts and dinners await.

In addition to guestrooms and hotel offices, Palais Norica is also home to the venerable Grillparzer Hall with cross-vaulted ceilings and wood paneling, ideally suited for conferences and celebrations in a stylish setting. In the “Moserkeller”, hotel guests gather to play, read and enjoy a drink together. At one time, this cellar was used as a stable, later, in order to store gold and silver bars. More recently, it was one of the hippest bars in town. The “Steak & Mehr” restaurant, with winter garden and terrace, is now located on the ground floor of Palais Norica.

Health problems plagued Franz Grillparzer (1791 to 1872) throughout much of his life. And so it came about that this famous Austrian author and dramatist came to Gastein Valley on multiple occasions, in order to “take the cure”. “This spa community probably saved my life back then. I returned home fortified and able to work once more”, Grillparzer noted in his autobiography. This literary icon traveled to Hofgastein at the recommendation of Ladislaus Pyrker, who was abbot of Cistercian Lilienfeld Abbey at that time and also actively involved in literature. A man with a love for the arts and presumably rather wealthy, the abbot also enjoyed close ties to the imperial household and is generally regarded as one of the pioneering figures of Hofgastein as a spa resort.

In commemoration of Franz Grillparzer: Franz Grillparzer was a guest at “Hotel Moser – zum Goldenen Adler”, today’s Palais Norica, in 1819 and 1827, as noted in the town chronicle. It was precisely this point in the local annals which caught the attention of the Czerny family while they were in the process of renovating Palais Norica. It is there that we can also read that the town of Hofgastein, back in the year 1890, formally passed a resolution, on December 27 of that year, to install “a memorial plaque made of marble, as well as a pipe for hot water” at Hotel Moser. To commemorate his visits and to mark what would have been Franz Grillparzer’s 100th birthday. However, this decision would ultimately be forgotten. And would not be followed through on until 2018, 128 years later, at the initiative of the Czerny family.

His Life: Franz Grillparzer lived in Vienna, studied law and, in addition to his literary activities, was a governmental official. Amongst other things, he was director of the k. k. Hofkammerarchiv (which would later become the Ministry of Finance), located in the Johannesgasse In Vienna’s 1st District. Today, this building houses the Literature Museum, where Franz Grillparzer’s study has been preserved true to the original.

His Works: Franz Grillparzer, who is also proudly proclaimed as “Austria’s National Poet”, began writing at an early age. He is known above all for his dramas, which are frequently performed even today. These include “Das goldene Vlies”, “König Ottokars Glück und Ende” – which was performed in 1955 at the reopening of the Burgtheater, “Ein treuer Diener seines Herrn”, “Des Meeres und der Liebe Wellen”, “Der Traum ein Leben”, “Weh dem, der lügt”, “Die Jüdin von Toledo”.
His autobiography, a new edition of which was published in 2017 (Jung und Jung Verlag), provides insights into his life, his travels and his encounters with contemporaries including Johann Wolfgang von Goethe.
As the name suggests, one of his poems, “Farewell to Gastein”, recalls one of his visits to the valley.

Cookies are small text files with information stored on your computer’s browser. With this information, our website recognizes that you have visited it before. We use it to prepare the information accordingly. Your personal data will not be saved.

Marketing cookies come from third-party (advertising companies) and are used to collect information about the websites visited by the user in order to create targeted advertising for the visitor. In this context, we do not process any personal data without your agreement in accordance with Art. 6, para. 1, lit. a GDPR."